201 County Club Drive was a relatively late addition to Greensboro’s most affluent neighborhood. The Colonial Revival was built around 1940, and today it retains the stately elegance of its era, which was rapidly drawing to a close. The house was listed for sale this week at $863,000.

The Morgan House has 4 bedrooms and 2 1/2 bathrooms, in 3,058 square feet, which comes out to an impressive $282 per square foot. The lot is 0.46 acre. The interior looks impeccable; the landscaping is gorgeous as well. The house is a fine example of Irving Park at its opulent best, but it isn’t quite as remarkable as its first owner.

Roy Morgan may have had one of the most distinguished careers of anyone in Greensboro in the mid-20th century, but he may be one of the least known among the city’s leading figures of the time. Aside from serving on the City Council, most of his work was far from Greensboro.

END_OF_DOCUMENT_TOKEN_TO_BE_REPLACED

The Lasater Mill House is a mansion that was originally an outbuilding for a bigger mansion. It was designed by Northrup & O’Brien for a niece of R.J. Reynolds, Nancy Margaret Lybrook Lasater (1877-1952), and her husband, Robert E. Lasater (1867-1954), an RJR executive. Nancy’s mother, Mary Josephine Reynolds Lybrook (1844-1888), was a sister of RJR; she was the first of 12 children, only seven of whom survived to adulthood.

The house is at the west end of Lasater Lake, where Blanket Creek runs down to the nearby Yadkin River. The exterior and the interior are spectacular. I’d love to know what Northrup and O’Brien would say about how the house has been updated. If those bathrooms wouldn’t blow their minds, nothing would.

END_OF_DOCUMENT_TOKEN_TO_BE_REPLACED

As J. Spencer Love was building Burlington Mills into the largest textile company in the world, he moved to Greensboro and built an 11,000 square-foot house befitting his status as one of 20th century America’s more prominent ground-breaking, union-busting industrialists. The mansion sits at 710 Country Club Drive on 3.3 acres of prime Irving Park property, and it went on the market this week for $7.495 million.

“The Love House is a palatial Georgian Revival mansion inspired by eighteenth century Virginia houses,” the neighborhood’s National Register nomination says. “It features Flemish bond brickwork, a steep hipped roof with segmental-arched dormers and a modillioned cornice, a five-bay facade with a swan’s neck pedimented entrance, a string course between floors, and brick corner quoins. Large one and two-story wings project from either side of the main block. An expansive landscaped lawn fronts the house and is bordered by a molded brick wall.”

END_OF_DOCUMENT_TOKEN_TO_BE_REPLACED

The W.T. Cheatham House is as impressive as it is rare, an International-style mansion built in 1923 in Burlington. There are relatively few International houses in the Triad, and this one in the West Davis Street-Fountain Place Historic District is brilliant inside and out.

“Its elegant design, which might best be described as ‘Classical-Mediterranean,’ renders the structure one of the most unusual houses in Burlington,” the historic district’s NRHP nomination states. “Salient features of the house are its flat roofs, stuccoed elevations, and two-story core bracketed by one-story wings with turned balustrades. Tuscan columns support the porch recessed between the wings.”

END_OF_DOCUMENT_TOKEN_TO_BE_REPLACED

“Because of both its historical associations and its architectural distinction, the William Lindsey House is a pivotal building in the Reidsville Historic District.”

The Lindsey House is as impressive inside as it is from the street. And, being in one of the Triad’s smaller cities, the $434,900 price ($83 per square foot) is probably, say, a third of what it might be in Greensboro or Winston-Salem.

Interestingly, the towering columns out front weren’t an original feature. “Early in the 20th century, a new porch was constructed across this facade, in the Neo-Classical Revival style,” the NRHP nomination says. “It consists of a one-story, full-facade porch supported by corinthian columns which are repeated in monumental fashion in the central projecting two-story pedimented portico.” The original porch was apparently wide enough only to span the entrance.

END_OF_DOCUMENT_TOKEN_TO_BE_REPLACED

124 West End Boulevard is the smaller half of a two-house entry on the National Register of Historic Places. Winston-Salem’s H.D. Poindexter Houses date back to the 19th century and consist of two adjacent homes, the Poindexter House and the smaller Poindexter Cottage. The cottage was put up for sale last week at $299,900 and almost immediately went under contract.

The houses now stand side-by-side in the West End Historic District, but they started out a few blocks away in a neighborhood that was wiped out by the expansion of Winston-Salem business district in the mid-20th century. Their rescue was an early victory for preservation in the city. By the time the historic district was created, the Poindexter houses already had escaped into its friendly surroundings.

END_OF_DOCUMENT_TOKEN_TO_BE_REPLACED

When Sloan and Geneva Gibson built their home in 1955, they were thinking modern all the way. The great room has bi-fold doors with motorized screens, opening the room to the outdoors. It was among the first homes in High Point with heat and air conditioning from an electric heat pump, NCModernist says.

The house merits a mention in The Architecture of High Point North Carolina for, among other things, its landscaping, designed as part of the house to provide privacy, and the concrete, tinted green so it wouldn’t stand out so much.

The Gibson House went on the market this week at $775,000. Even though it’s 65 years old, the listing describes it as “contemporary.” It started out modern, but it’s become timeless.

END_OF_DOCUMENT_TOKEN_TO_BE_REPLACED 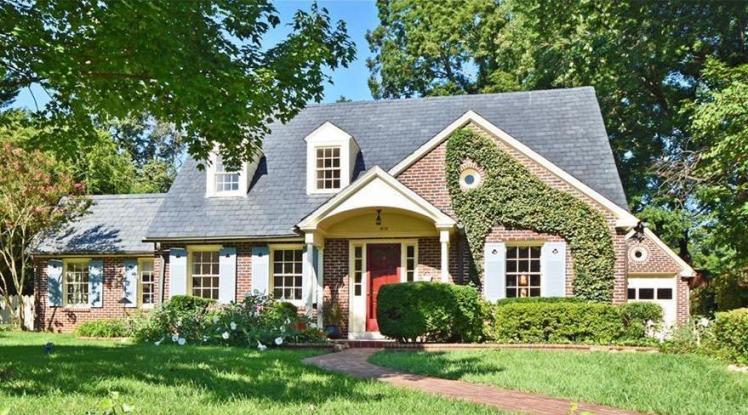 The house was designed by Luther Lashmit. Lashmit, a partner in Northrup & O’Brien of Winston-Salem, designed two of the city’s most famous houses, Graylyn for Bowman Gray and the Internationalist classic Merry Acres for R.J. Reynolds Jr. (Merry Acres was donated to Wake Forest University, which, incredibly, demolished it.).

END_OF_DOCUMENT_TOKEN_TO_BE_REPLACED

Caswell County has some of the grandest antebellum mansions in the state. The John Johnston House is something quite different and more rare. “Though members of the Johnston family were prominent in social and economic affairs in Caswell County from the eighteenth century onward, the significance of the house derives less from the specific historical contributions of its occupants than from its representation of a class of plantation residence that has rarely been preserved,” the home’s 1997 National Register nomination says.

END_OF_DOCUMENT_TOKEN_TO_BE_REPLACED

A guide to the most historic, notable and distinctive 18th-, 19th- and early- to mid-20th-century homes for sale in North Carolina's Piedmont Triad region.

All information is believed to be accurate but is subject to change without notice and cannot be guaranteed. The information on this website is not intended to provide you with advice on real estate or any other matters. Click here for more information.