When the glory days of Rockingham and Caswell counties passed, they didn’t leave  much behind except some grand old houses. Rivermont in Eden is a relatively late example of the old mansions of Rockingham County (there are two others currently for sale and another under contract). Built in 1936, it’s move-in ready and all yours for $650,000.

With 5,200 square feet, the price works out to $124 per square foot, modest by mansion standards, especially for one that appears to be in such great shape. Rivermont has 5 bedrooms, 5 bathrooms and 2 half-baths. The address is 351 W. Meadow Road. The property comprises 15 acres on the Smith River in the Leaksville section of Eden (you know about Eden, right? Leaksville, Spray and Draper were three small towns that grew together and merged in 1967 to become the town of Eden).

Rivermont was used by its last previous owners as an event and performance venue (Facebook page, last updated more than a year ago). The current owners bought the house in March 2019 for $400,000. They’ve made some renovations, secured designation for it as a local landmark in June 2019 and now have it for sale again (at a 62 percent mark-up).

Early in the 20th century, the land belonged to B. Frank Mebane, a grandson-in-law of Gov. John Motley Morehead. Mebane built a “log clubhouse” there in the 1920s. The property was bought by Frank Letcher Eggleston (1897-1980), who owned a tire store, and his wife, Mattie Sue Parker Eggleston (1904-1998). They hired prominent Danville architect J. Bryant Heard to design their home.

“The property is locally significant  as a largely intact example of a large, stately Colonial Revival style home,” the landmark ordinance states. “The house is well set back of the road and is accessed by a long circular driveway lined with mature boxwoods. Originally, there was a large riding ring for horses that were kept in stables on the property (no longer standing). The grounds were landscaped with 1,500 English boxwoods as well as native shrubs and large trees.

“The house is an elegant, painted brick, Colonial Revival style house with a two-story gable roofed center main block with flanking one-story wings. The five-bay wide main block has a full-height porch topped by a balustrade, with six large columns which were imported from England. The front entrance has a paneled door with leaded glass sidelights. The main block has an exterior chimney on either end. The right wing houses the kitchen and servants area as well as a garage and has a recessed arched loggia with smaller columns which were also imported from England. There is a two-car garage addition on the rear of this wing. The left side wing contains the family room and features a conservatory with a bellcast roof. The house is lit by eight-over-eight casement windows. The third floor once served as an enormous playroom. The house has gabled and hip roofs covered with slate shingles. Slate is also used for the walkways and patios. 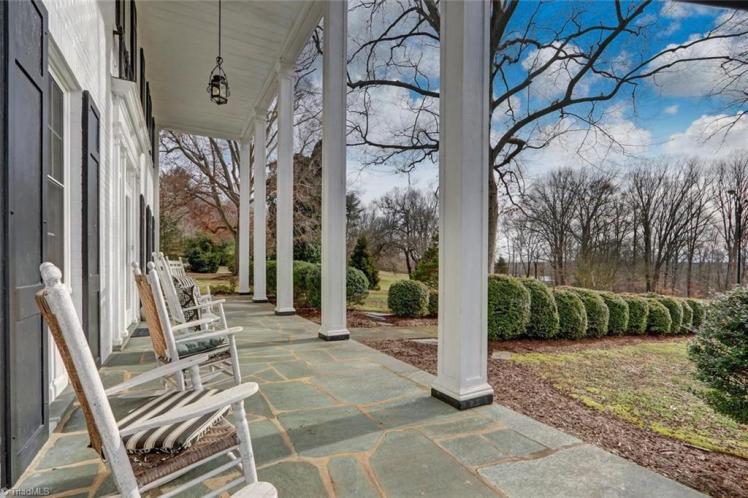 “The main block of the house contains the living areas on the first floor and bedrooms on the second floor. the living and dining rooms feature handmade Williamsburg-style cornices. the entry hall features arched doorways and an elegant flying staircase. There are several fireplaces with original details. the family room has a wall of built-in bookcases.” 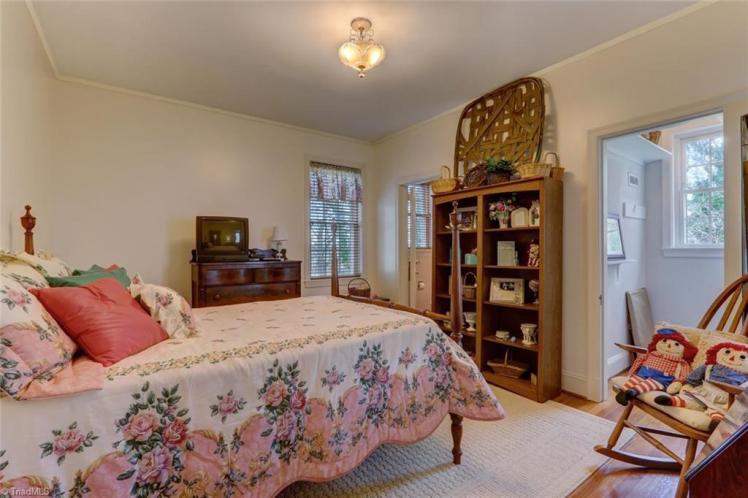 Rivermont was built just after colored bathroom fixtures were developed.

A guide to the most historic, notable and distinctive current real estate listings for 18th-, 19th- and early- to mid-20th-century homes in North Carolina's Piedmont Triad region.