Maybe it’s time to take another look at Eden. I drove up there recently to visit the Central Leaksville Historic District, particularly to take a drive-by look at 527 Patrick Street. Gorgeous neighborhood, gorgeous house, and amazingly affordable. After an afternoon wandering around town, I came away wondering if the town might be the Triad’s best undiscovered place for affordable historic homes.

County records list 527 Patrick as being built in 1920, but that would be way late for a Queen Anne like this. The historic district’s National Register nomination gives a more likely 1886 date. The house has three bedrooms and three bathrooms in 2,456 square feet. The listing’s pictures show the house to be in very good condition. The lot is 0.57 acre. It’s priced at $219,900, $90 per square foot. That’s a fabulous price compared to what a similar house would cost in, say, one of the historic districts in Greensboro or Winston-Salem.

Amazingly, the 134-year-old house has had only three owners. It was built by B.W. Ray and his wife, Helen Betts Ray. He was headmaster of the new Leaksville Practical High School; she was a teacher at the school. They had come from New York, and after Mrs. Ray’s death about 20 years later, Mr. Ray returned there. He kept the house as a rental property. For a time it was a boarding house, according to the invaluable A Tale of Three Cities: A Pictorial Survey of Leaksville, Spray and Draper (if the link doesn’t work, search for the book on Ebay). In the ’20s, Mr. and Mrs. S.H. Jamerson moved in with their family. They lived there for about 20 years before buying the house from Ray’s son in 1945. The Jamersons’ descendants sold the house to the current owners in 1981 for $32,000. They restored the house to its current lovely state.

The ‘Land of Eden’

The town’s story is worth summarizing for those coming in late. In 1728, a surveyor was so impressed with the area he called it the “land of Eden.” And so, about 70 years later, a community had formed, and the residents decided to call it “Leaksville,” caring little for history or poetry. Then another community formed very nearby, and they decided to call that one “Splashy,” because of a waterwheel on the Smith River there, to hear The North Carolina Gazetteer tell it. Later, they decided “Spray” was an even better name. And then another little town formed almost on top of the others, and they came up with the relatively colorless “Draper,” after a local mill owner. By 1967 the small towns decided to merge. This time, they did look back into history. The towns’ great industrialist, John Motley Morehead, already had a city named for him, so they put his name on the high school and the hospital and called the town “Eden.”

The oldest residential section of the combined town is the Central Leaksville Historic District. “The predominant historic fabric of the district dates primarily from the 1850s to c. 1935, although there are a few houses that date from the 1810s-1840s,” the NRHP nomination says.

It’s a well-preserved and architecturally diverse neighborhood, including “a substantial number of antebellum structures, and a wide variety of residences dating from the 1870s to c. 1935. They exhibit a number of locally and nationally popular architectural styles including vernacular folk types, Greek Revival, Italianate, Queen Anne, Colonial Revival, Bungalow, English Tudor Revival, and Dutch Colonial Revival.”

Here are some highlights of Eden’s current and recent listings. The prices of even the grander homes are relatively modest (note the price-per-square-foot figures). 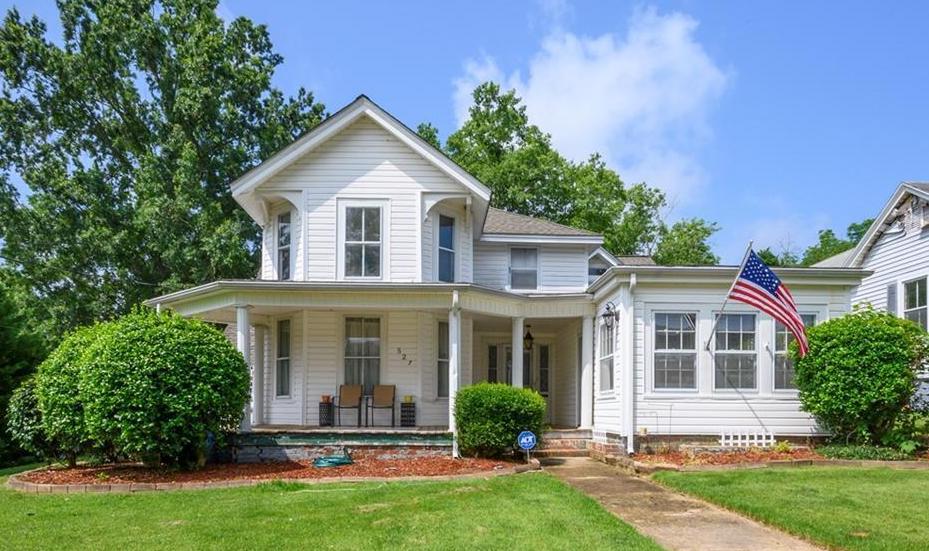 A guide to the most historic, notable and distinctive 18th-, 19th- and early- to mid-20th-century homes for sale in North Carolina's Piedmont Triad region.

All information is believed to be accurate but is subject to change without notice and cannot be guaranteed. The information on this website is not intended to provide you with advice on real estate or any other matters. Click here for more information.